THE AVENGERS are making good money…

Ok, that ain`t no surprise, I guess.

The movie opened here already(Germany), and in many other countries as well.

I will see it in the next few days, a screening around 2 pm,maybe. I don`t want the theatre to be packed, I`m getting pissed at people easily, so the less visitors, the better.  Normally, I wouldn`t go to the theatre for something like Captain America or Hulk, or Iron Man. But with free tickets, I am easily to convince. And this time, it`s more than just one, it`s a full army of super heroes, and everyone must like at least one of the characters, right?I expect to have a good time!!!

The only thing that bothers me is Hulk, again a new actor for that character. But that´s just a  minor complaint.

In the US, you have to wait til May 4th.

WTF – POSTER OF THE DAY

Well, actually I found this some time ago, but came across this again by accident, and thought it`s well worth posting:

US  movies. But they also added their own flavour to it, in this case pure racism. Eddie Murphy is depicted here as the clichéd  black man, as you can see them in old movies from over 50 years ago. Eventhough there is a scene with a

banana in that film, doesn`t excuse this poster. 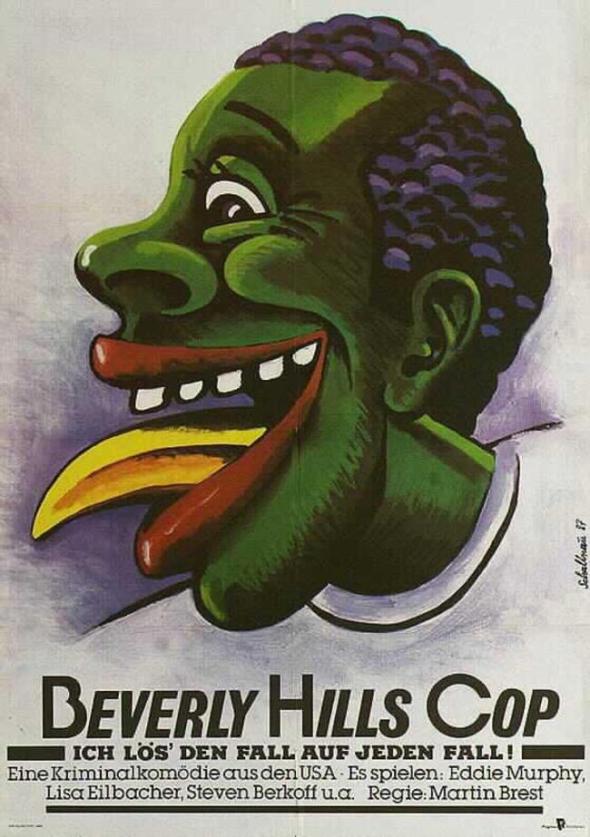 I posted this on my personal facebook, then I forgot to add it here..now -here you go!

I´m bidding on Return of  the Jedi , too…should be mine, if all works out. Same seller for all three, so I´ll expect the same 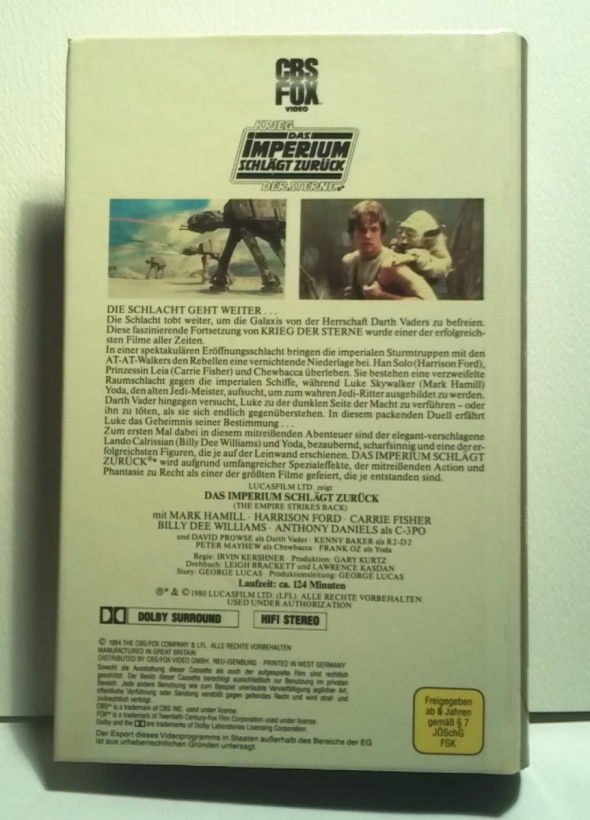 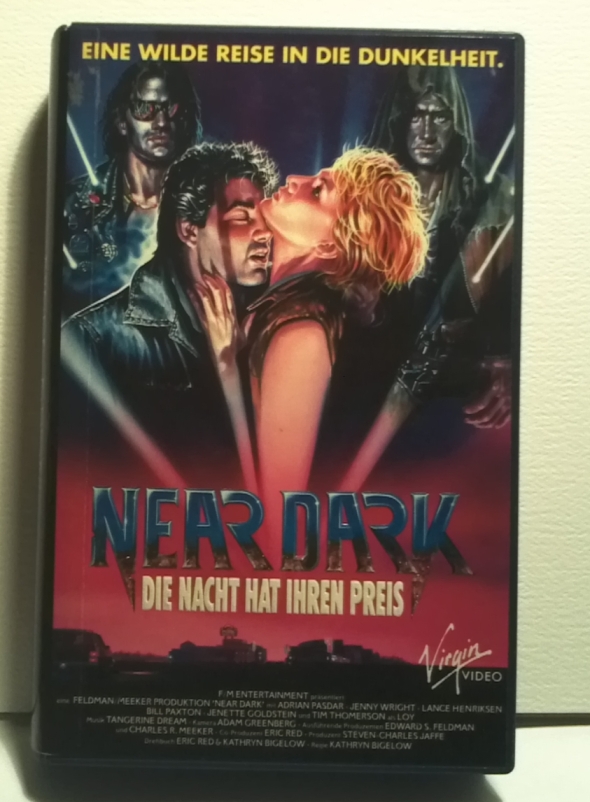 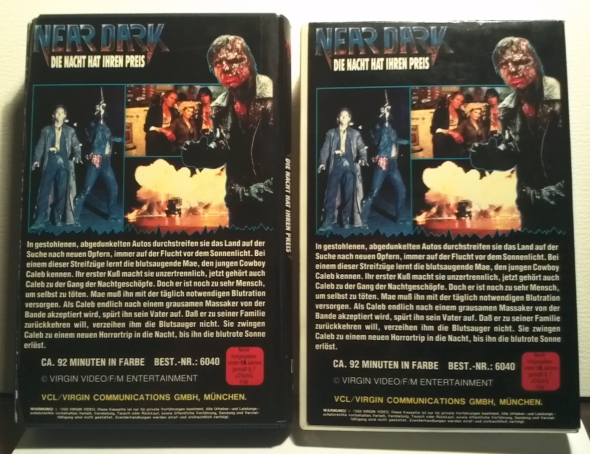 I bought two of these, sadly both had minor damages..one misses a corner, the other one has a scratch on the front cover.

The front cover is a great example of 80`s cover artworks. The NEAR DARK title is embossed, which makes it even more awesome. 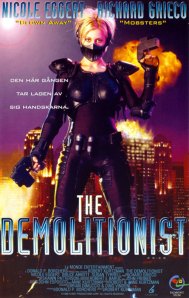 A female cop gets ressurected as THE DEMOLITIONIST in a near future setting, where crime is rampant…what a surprise..

It steals ideas from various films, nothing very original. But I don`t mind, if done well.

But now, when I am honest, it fails on a lot of levels. I liked the visuals in general,

but the action is poorly choreographed, the gunshot wounds are nothing but red powder clouds( are blood squibs really that expensive?) After all, they had Greg Nicotero and Savini on set, but it wasn`t KNB EFX, if I´m reading correctly.., are these FX really that expensive?  All the talent   needed was on set. I would`ve expected that Kurtzman would  want to shine with FX in his directorial debut…well. Not the best circumstances , I guess. Money and time issues, dunno.

Ok, the budget was pretty low, one million$, but still.

The emotinal drama took way too much space and time in the film, which hurt the pace immensely.

The female robocop variation is interesting, but instead of setting up some awesome scenes to make use of Eggert`s looks and body, they decided to go all drama on us. And there was way too much talking from everybody, which also hurt the pace and makes you wish to fast-forward very often.

Still I liked a few things about it, but it wasn`t enough to save it.  It was a good concept wasted . A cool suit alone is not enough.

As I said, I liked it back in the late 90`s when I saw it first, but now, having watched it again, it`s evident that I was very forgiving. I correct my old opinion, and say: ” Nope, sorry…good concept, badly executed. In Robocop, the drama was kept to a minimum, and rightly so . But Robocop is a totally different level, impossible to compare, really.

I wonder, if anybody will pick up this scenario of a female  robocop ever again. Done right, it could be a really good thing. You could make her a stripper, gunned down in a bar, during a gang turf war or something, And make sure to include a Cyborg strip/sex scene. Or somethin…In closing, this was a dissapointing rewatch, that showed that memories can fail you.

I just came across the ALL-WET-BLOGATHON, and felt like taking part.

It`s all about rain, chose your ( or one) favourite scene in the rain. 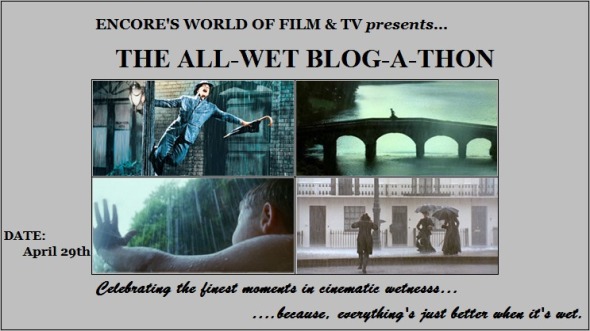 My choice is this : CYBORG, by Albert Pyun, featuring VAN DAMME, the final fight is all rain, all the time, plus thunder and lightning… 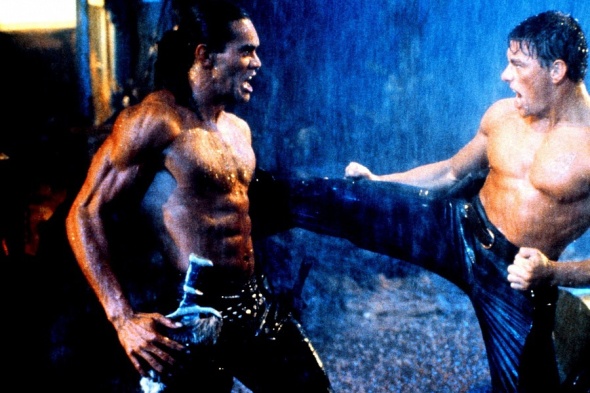 (Nothing like an all-wet fist fight in the rain)

You can enter yourself until Sunday the 29th of April 2012.

This cover is part of my childhood… beautiful, in good shape for beeing 27 years of age. Got this pretty damn cheap.

Iconic image of Stallone, forever associated with the Rambo character. Here, instead of  paint finish on cardboard, its more of a PVC  plastic surface,very smooth.

Picture of the day

Stand Up Guys stars Al Pacino and Christopher Walken as a pair of aging con men looking for one last score, directed by Fisher Stevens (this creepy motherf*cker), with no release date set yet. But I don’t think you need to know any of that to enjoy this picture. It looks like an improv exercise where the assignment was to create an instantly-recognizable Al Pacino and Christopher Walken impression using only grunting noises.

That certainly is a film I will watch!!!!!

A beautiful hemophage infected with a virus that gives her superhuman powers has to protect a boy in a futuristic world, who is thought to be carrying antigens that would destroy all hemophages.

This film is a Milla vehicle from start to finish, and I couldn`t ask for more. The film is severly flawed, yes, but there are multiple reasons for it, too. 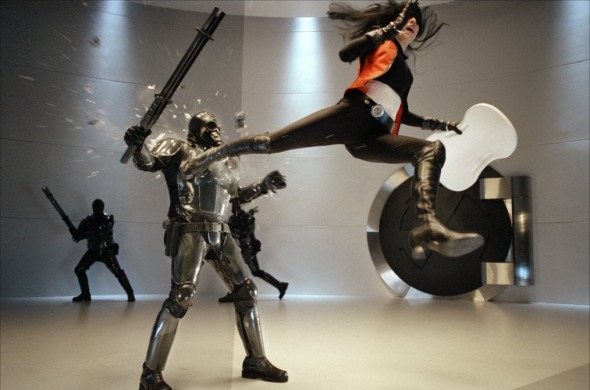 Wimmer wasn`t allowed his final vision, the film`s FX weren`t even finished properly, and so it ended up a mess.

Not that it would`ve been   a masterpiece, but it might have been a more satisfying film.

The original lenght was about 2 hours, cut down to under 90 minutes. The unrated cut (not director´s cut), is about 7 minutes longer, a bit more fighting and plot, but still not saving it.(still includes some important scenes)

But if you didn`t like the theatrical version, you won`t like it more with the unrated. It only benefits the ones who already liked it, wanting more… and it should have  contained more blood and gore, it`s kinda tame in that department.

Despite that, I kinda have a soft spot for this film. And knowing it could have had upgraded FX and a more fleshed out story, hurts.

It`s still silly fun, often very easy on the eyes, at least mine. Mostly  due to sexy Milla, who I just love in about everything.

It is ridiculously colorful, maybe too much for some.

Kurt  Wimmer , again used the gun kata, seen before in Equlibrium, this time more fluently, as he intended already in Equilibrium, but his fight chorographer then , Jim Vickers, opted for a more rigid approach.

So, most of  the fuck up, that Ultraviolet ended up beeing, is due to the producers interference.

I am afraid that a director`s cut will probably never see the light of day.

But that`s the way things go these days ….

It is a mix of several films, if you will. Think Blade, Equilibrium, The Matrix etc.

It is not exactly original, but to me, has a high entertainment value. You could make me watch it anytime, I wouldn`t object.

There was even a moment when I felt for Milla( and her baby), even if the film doesn`t make you feel all that much for the characters.

But then again, I can be very sensitive at times. And Milla makes me sensitive, in more than one  spot.

Thankfully, Milla keeps making Resident Evil movies, so I get to watch her in even more zombie-dystopian-future films.

I`d like to see Wimmer get a proper budget and final say with one movie for once.

Until then he is busy writing screenplays for big budget movies, like Salt, Salt 2 and  Total Recall.

Visually, I love it, even with the evident FX issues sometimes. Look over substance, in this case.

But paired with Milla, this is a guilty pleasure of mine. This also wasn`t a proper review, I know…

more of a statement.

ROBOCOP 2- german VHS Big- were only on sale in video stores, no rental stickers, in great condition.

robotGEEK was so kind to send me this- HIT LIST , directed by William Lustig-with Lance Henriksen and Jan-Michael Vincent.

The german tape costs around 20 Euros used, but this will certainly do for now( I am not the biggest fan of german language versions anyway…). Luckily, the US tape isn`t nearly as costly. I mean, I love this film, but 20 Euros is too much for me at the moment. Actually I owned the german tape once, it has great artwork, featuring  an evil-looking Lance on the cover….don`t bring up the fact that I sold my entire VHS collection once..big mistake! 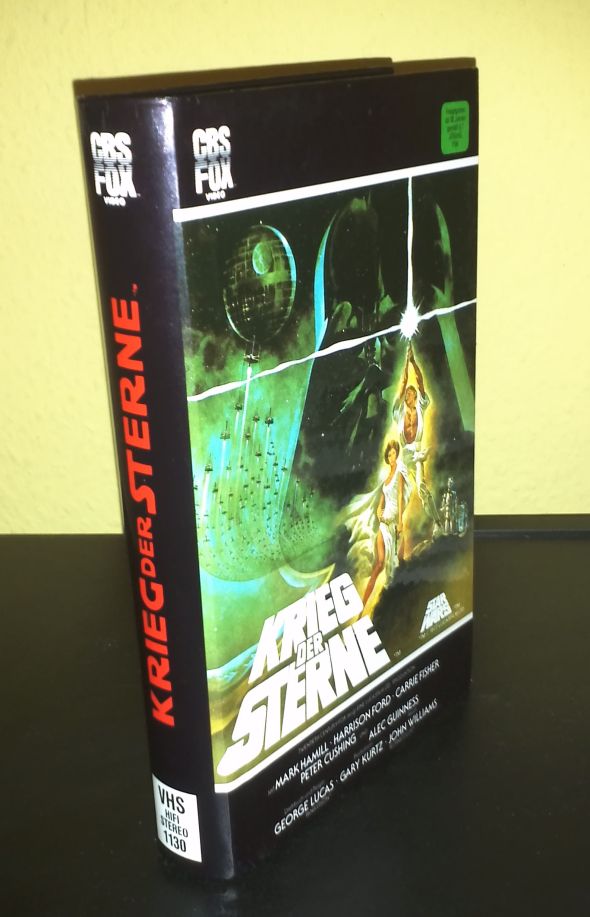 This is a really beautiful book-style cover of STAR WARS , Big Box clamshell from 1988.

I also bought The Empire strikes back, still on its way here…and I will get the Return of the Jedi, too. They just look too awesome. 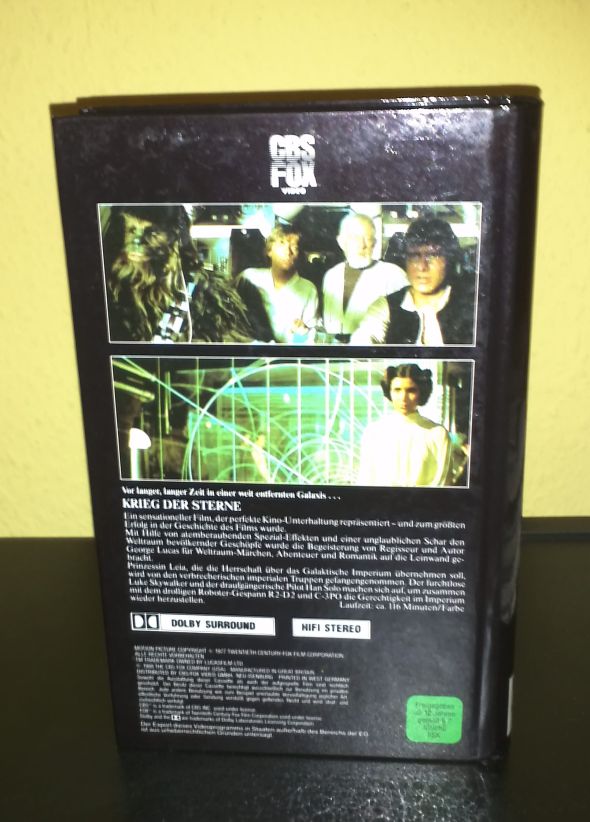 Its in very good condition, considering the age and the delicate cardboard cover.

Sites I am following -these folks rock!!!!

The Life and Art of Vern